The whos, the whys, the whats, the where…

What is PCS4 Europe?

PUBG Continental Series (PCS) 4 is a premier global PUBG Esports online event taking place across Europe, The Americas, Asia and Asia Pacific. In Europe, 16 of the region’s top sides will go head-to-head to battle it out for the lion’s share of the more than $250,000 USD prize pot.

The beauty of PCS is anyone can compete, regardless of experience or skill level, and we’re inviting all squads to take part in the Open Qualifiers to earn their place at the Grand Finals. Simply sign up using the links below, and you could find yourself rubbing shoulders with the best rosters on the scene.

When is PCS4 Europe?

The PCS4 Europe Grand Finals will take place over the following three weekends, and fans can watch all of the action on the official PUBG Twitch, YouTube and TikTok channels:

How do qualifiers work?

Open Qualifiers will be split into three regions, Europe West, Europe East and Middle East & Africa. Hundreds of teams will go head-to-head, with the best 16 progressing to their Regional Playoff Ranking stages, where they will join eight invited teams. Those 24 squads will then lock horns to determine their ranks for the next stage, Regional Playoff Survival.

After eight matches at Regional Playoff Survival, we enter the Last Chance phase. The final 16 teams play four matches, with total points scored determining the top eight who progress to the Regional Playoff Finals. Points earned in the WWCD matches carry over, so teams will need to be consistent – points will be tracked using the SUPER settings.

Those eight teams will then be joined by eight invited teams at the Grand Finals.

Check out our flow chart to see how everything comes together: 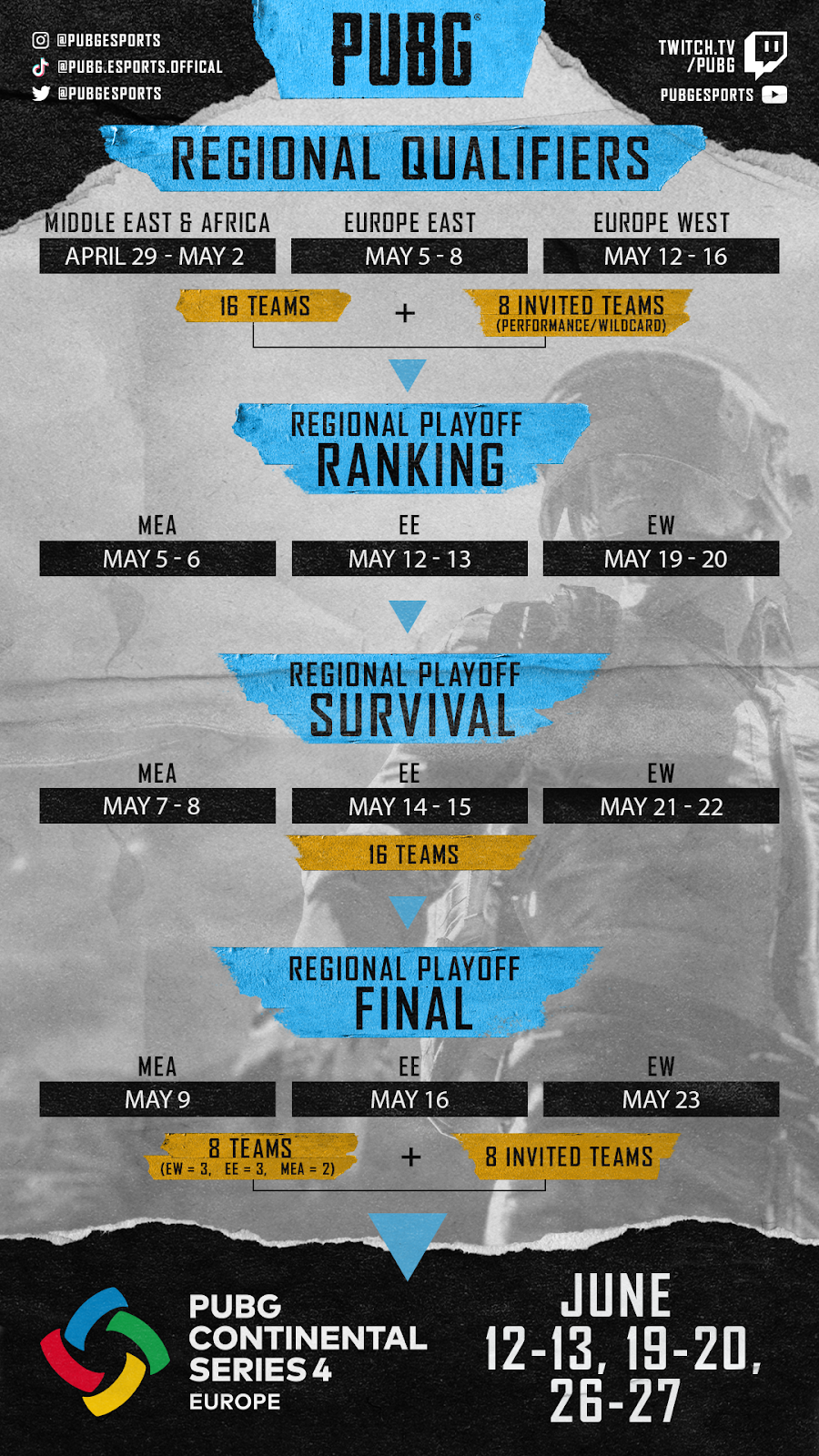 When are the qualifiers?

Qualifiers will be split into Europe West, Europe East and Middle East & Africa.

Register your squad using the links below:

Where can I find the latest updates on PCS4?

As ever, we’ll be sharing all news – such as Pick’Em Challenge details –  on our official Twitter, Instagram and TikTok channels, as well as the PUBG Esports Europe site.